Unai Emery’s first step in his Gunners journey to take the club back to the top of the game sees perhaps his toughest test of the season – against Champions Manchester City.

Emery has acted early in his efforts to fill the gaps in the squad, with five signings early in the window, and those signings may well be involved in some capacity, if our pre-season results are anything to go by.

That’s the kicker – for the first time in quite some time, we have no idea what formation or lineup Arsenal will have before they kickoff – and it’s mighty refreshing.

Emery has a hell of a task to get off to a winning start, but if there is a right time to play City, it is right now. 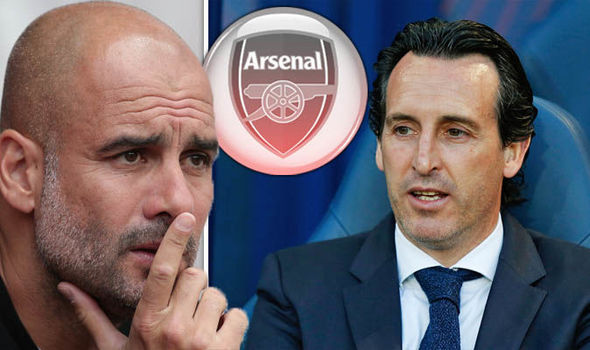 With a host of their players either only just returning, or still on leave after their World Cup efforts, they will have a mixture of a weak and tired team, and they will be far from their strongest.

Still, a point would be good enough, especially as this is Emery’s first proper game in charge.

Emery will be unable to call upon club captain Laurent Koscielny until at least December, and Sead Kolasinac is out for around ten weeks. In terms of other injuries, Nacho Monreal has returned to first team training, but will not be risked, with Emery declaring in his first press conference that youngster Ainsley Maitland-Niles will be given the job of holding down the left flank. Aaron Ramsey should be fit for the game.

In terms of who makes the team, who knows? If Emery is looking to keep it tight and hit on the break, then Lichtsteiner will be preferred to Bellerin. Shkodran Mustafi and Sokratis look to be the preferred pairing in the centre, with AMN coming in on the left.

In midfield, Matteo Guendouzi has impressed, and Lucas Torreira will most likely be eventual first choice defensive midfielder, but both will be an outside bet of making the eleven. Guendouzi’s lack of experience will cost him, although a spot on the bench is still testament to how good he is and how highly he is rated. Lucas Torreira has not been in training for long enough to be a guaranteed start, so it could well be last season’s pairing of Ramsey and Xhaka – but Xhaka should benefit from a much clearer idea of his role this season.

We have an embarrassment of riches up top, but it is unclear who will play after some heavy rotation by Emery in pre-season. Most likely will be that Pierre-Emerick Aubameyang will be a wide forward, with Lacazette playing as a more traditional number 9, both being supplemented by the able talents of Henrikh Mkhitaryan and Mesut Ozil.

City will have the force of Aguero and Jesus available, and both Silva’s should be able to be called upon, although Mahrez should get the nod too, with Sterling still unavailable.

Pep has only signed Mahrez thus far, but his squad was already filled with talent, so a heavy recruitment drive was never on the cards. They will arrive at The Emirates with a gameplan, and we need to apply Emery’s instructions to the letter if we are to succeed.

We lost emphatically on three occasions to City last season, as we stumbled to 6th place and lost in the League Cup final. Things are a little different now, and we should at least provide a stiffer test than what we produced back then.

Fingers crossed the Emery Era begins with a bang – and 3 points! UTA