Sokratis Papastathopoulos has finally signed on the dotted line for Arsenal, after a delay in officially announcing the defender.

In what must be one of the worst kept secrets in recent transfer windows, Sokratis has signed and been declared a Gunner after joining from Borussia Dortmund after five years with the German club – for a fee thought to be around 17.7m.
The 30 year old was officially declared by the club yesterday, but what do we know about our new defender? 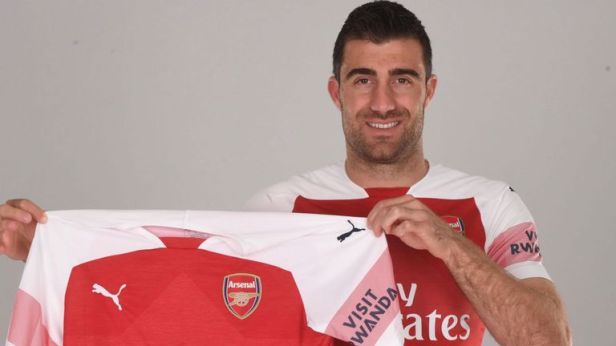 Well, we know that former Dortmund boss Thomas Tuchel has said Sokratis is ‘obsessed’ by defending, and that he is Vice Captain for Greece. He was at Werder Bremen before joining BVB, and has a fixation on the backline perhaps thanks to his time in Italy with AC Milan and Genoa.

Sokratis joins Bernd Leno and Stephane Lichtsteiner as Arsenal new boys this summer, and will also join up with former Dortmund teammates Henrikh Mkhitaryan and Pierre-Emerick Aubameyang. A sure fire sign that Sven Mislintat is involved heavily in the recent recruitment process.

Sokratis revealed to the Arsenal media team he had spoken to his former comrades about joining, saying “I spoke to them a lot. They said to me the best thing about the club is that it’s one big family and of course they called me a lot of times telling me to come here.”

Sokratis, when asked about his thoughts on his new club, said “Arsenal is one of the biggest three teams in the Premier League, and one very big club. It has a lot of fans and a big history.. I’m very happy to be here to help the team.”

Sokratis is another recruited player from this summer that ticks the ‘experienced’ box. With Stephane Lichtsteiner also in the 30 and over bracket and with heaps of top flight and international experience, It would seem Arsenal’s new boss is focusing on making an immediate impact, rather than looking to making a splash in the future.

It is also a big plus, as we have all been able to see we need a steady hand at the back with leadership qualities – especially when the ship is rocking. With both Lichtsteiner and Sokratis in the backline, we will have that reassuring influence that we have been wanting for quite some time.

With Laurent Koscielny out until at least December, it gives Calum Chambers and Sokratis time to gel and forge what could be an impregnable bedrock. The Greek defender can also help his Greek compatriot who shone briefly toward the end of last season and is another Sven Mislintat recruit – Konstandinos Mavropanos.

Sokratis ‘ main strength is his physicality, and his obsessive desire for clean sheets, which sees him put his body on the line when the pressure is on – something he will expect from his teammates. He is also half decent in the air at the back and on set-pieces, although his goal ratio is hardly prolific, with only eight goals in nearly 200 appearances for Dortmund, Bremen and AC Milan.

Our new recruit will give us immediate resources at the back and could be an astute signing and a valuable player for our defence, who sorely needed a player of his stature in some hairy moments last season.