Arsenal have a raft of youngsters waiting for their opportunity to shine on the biggest of stages.

They have fought through every tier of the Arsenal pagoda, until they stand on the precipice of the very zenith. This is where the majority of these starry-eyed kids stumble.

The numerous youth teams act as a conveyor belt of sorts, pushing each product closer and closer to the point where they are quality tested and judged whether they can be added to the Arsenal first team. Chuba Akpom has been standing on the threshold for some time now – and the latest development will see whether he is Arsenal material or destined to carry on his career elsewhere. 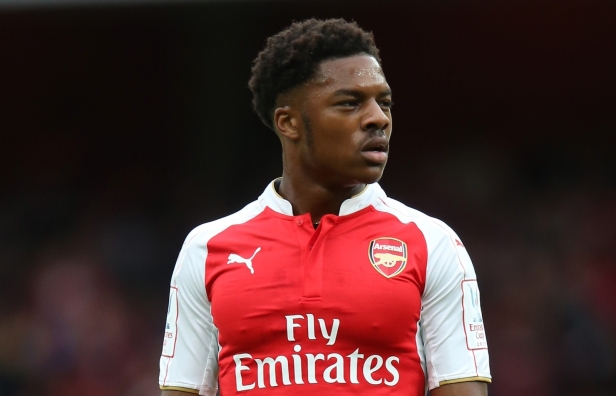 Despite being part of the first team squad this season, Chuba has played a miniscule amount of football. The logical conclusion was to send Akpom on loan again, and it has seen Chuba arrive at Brighton and Hove Albion for the rest of the season.

The Seagulls are flying high in the Championship and pushing hard for an automatic promotion slot to the Premier League. Akpom’s arrival will give Gulls Boss Chris Hughton another option in attack to supplement the efficient Glenn Murray.

Akpom is a deft hand in this Division. He has had extensive loan spells in recent years at Hull City and Nottingham Forest, both of which were perceived as successful for the players development and also for the team as they benefitted from Akpom’s pace and goals.

He should get enough game time to make his presence felt at the club – and also to alert Arsene Wenger that he is ready for a bigger role at Arsenal. In reality though, what does Chuba have to do to force himself into the Gunners ranks?

At this moment in time, Arsenal have Alexis Sanchez, Olivier Giroud, Danny Welbeck and Lucas Perez vying for a striking spot. This means that Akpom would have to oust at least two of these established international strikers to gain a prominent position.

It also means Chuba needs results in order to complete his forst objective, which is to grab attention. He needs goals, and plenty of them. His talent has never been in question, but in the face of such tall odds – is Akpom’s target to gain a higher profile transfer in the summer?

With so many striking options at Arsenal, it seems highly unlikely that the 21 year old is going to get that first team spot he covets. This does not mean his loan spell is futile though. It actually places more pressure on the spell on the South Coast.

If he impresses as he has done in his previous sojourns from Arsenal, then his agent will be able to hawk him around to ambitious teams looking to add some genuine fire to their squad. Akpom would be able to grab a move to a Premier League side, if he achieves good things with Brighton.

This loan spell could actually set out his career path for the next few seasons. If he impresses, it means he gets that shot at the big time – either with Arsenal or with another top-flight team. If he flatters to deceive, it could put him lower in the pecking order at Arsenal, and if he seeks a move, it will see lesser lights seeking his signature.

That conveyor belt at London Colney I talked of earlier? It means that if there is not progression, it sees the players behind you pushing you off the belt. There is a perpetual queue of youth products waiting to take that test that Chuba Akpom now has to take.

Kelechi Nwakali, Takuma Asano, Jon Toral and Daniel Crowley are all currently on loan at top flight teams around Europe. They will gladly take the ball that is potentially dropped by Akpom, should he fluff his lines at Brighton.

The pressure on these young men is immense, but the reward dwarves this weight on their shoulders.

Can Chuba Akpom deliver? We will all watch his every move.