Wow, talk about a contrast.

Last week we saw our full strength side scrap and scrape a 2-1 win over Burnley at home, thanks to a 97th minute penalty.

This week, we saw a supposed understrength side absolutely take Southampton to the cleaners in their own digs, to the tune of five unanswered goals. 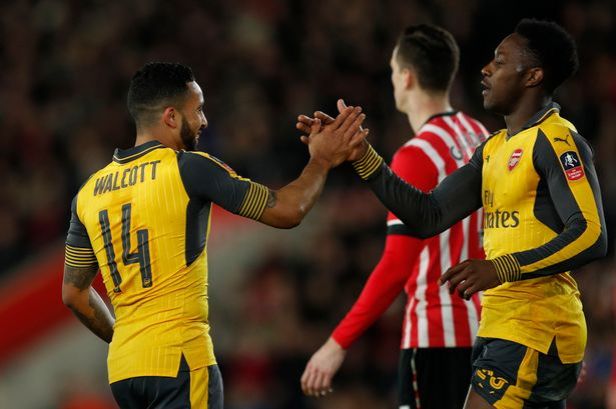 As expected, Arsene Wenger made a host of changes for this tie – ten in total – before he left the team in the hands of his Assistant Manager Steve Bould. His four match ban after his dealings with the fourth official started with this match, and with an unfamiliar side named and a somewhat bogey side to face, things were looking dicey.

Claude Puel also rang the changes with ten differences from midweek, but he and his talented youngsters could not have foreseen what was to come.

Arsenal fans rejoiced as their was the long-awaited first start since last season for Danny Welbeck, and he started up top. There was also an immediate return to action for the fit-again Theo Walcott, and both were to show they were worthy of inclusion.

Keiran Gibbs, Rob Holding, Lucas Perez, Oxlade-Chamberlain, Maitland-Niles and The Jeff himself were all part of the side, and The Ox and Maitland-Niles formed an unusual central midfield pairing. They would face Pierre-Emile Hojbjerg and Jordie Clasie in the centre of the park – and absolutely boss it.

Arsenal started on the front foot, and it took only fifteen minutes for ‘Dat Guy’ to make his mark. He showed good control to take Lucas’s pass, and his high finish off the crossbar showed excellent composure.

Seven minutes later, he had a brace. The source was The Ox this time, but the result was the same; good control and smart finish.

With ten minutes left, Arsenal killed the game. Super Danny Welbeck was again heavily involved, but he wasn’t the finisher. He instead showed great awareness to cross for the lurking Theo Walcott for a close range finish.

There were more chances for the Gunners, and it seemed as if they would put the tie to bed before the half time whistle, but at half time, the score remained 3-0. The Saints were not at the races, but even if they were bang on form, Arsenal would have quelled their force.

The second half saw no revival, nor a collapse from the Gunners. It was again more of the same, as the away team kept their boot firmly on the jugular of the home side. They continued to create and run at Southampton, who had no answer to this incredible show of force. Danny Welbeck was withdrawn from the action on 64 minutes before he could grab a fairytale hat-trick, but there would be a treble in the game.

On 69 minutes, Theo grabbed his second. Alexis, a second half sub, picked him out in the box and a smart first time finish into the far corner gave Arsenal the fourth. Florian Gardos and Jack Stephens – the Saints centre-backs – were left spinning by the artistry of Lucas and Alexis, and the rampaging runs of Theo and Welbeck.

Theo grabbed his hat-trick and his 99th Arsenal goal, when Lucas’s ball from a Southampton attack found a running Alexis. He had two men on his tail, but he held up play until Theo was in the box. Another first time finish and he had the match ball. 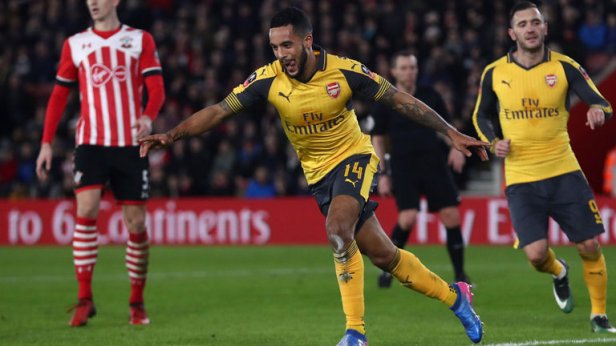 That was that, and Arsenal were emphatically through into the Fifth round of the Cup. Here are some hot talking points from the game;

Competition fires the side

This team, Theo aside, have been on the outskirts of the first eleven this season. They would have lacked rhythm, sharpness and cohesion. They showed that hunger is one of the most important traits of all, perhaps more so than the others aforementioned. They were all on fire and wanted to put on a show. Rotation may just be necessary as we have a large squad, but also because these players need to play to give a reminder to the manager.

At 4-0 up and the game signed, sealed and delivered, Southampton started to foray into Arsenal territory. The sight that warmed my heart more than the goals and the win, more than anything really, was seeing The Ox and Theo chasing back to help out with the defending in their own box. It was these young men showing they had grown up and they want to play a big part and they are willing to put in the hard yards. This is exactly what we need.

Lucas is so effective

Eight starts, and eight times he has been involved directly in a goal. He grabbed an assist this time, and he looks so assured on the ball. His cool head and great touch should be utilised more often as the season progresses, and I’m confident he will not let us down. His assist for Welbeck was sumptuous.

Welbeck to play a big part 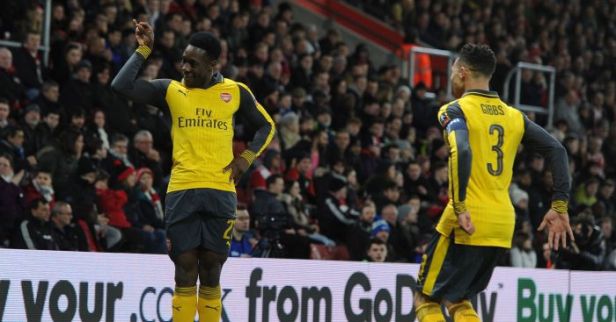 Whenever he has put on our shirt, Welbeck has given his all. This is the reason why our fans universally adore him. His pace, his favouring of balls ahead of him rather than to feet, his touch and his defensive qualities make him a true asset. If his fitness holds, then he could very well nail down a starting spot. Even if he doesn’t start all the games, he will have a huge bearing on our season. Love you Welbz – and that celebration!

Holding holds his own again

What a prospect. He again showed nous way beyond his years in this performance. He will have tougher games, but he is looking every inch an England player for the future. If he continues this growth, then a starting spot for Arsenal when Koscielny steps down could be on the cards. One step at a time at the moment though. He needs to continue what he is doing, but you can’t fail to be excited by what he is capable of.

There was a lot going on during this set of ninety minutes, far more than the above. Particularly impressive was Ainslie Maitland-Niles starting in the centre. He seems to have the confidence of the boss after starting a few cup games this season, and he has a great touch, as well as physical strength for a slight frame. The Ox played well in the centre too, and he appears to have grown this season.

Next up is a game against Watford on Tuesday, before we travel to Stamford Bridge in the weekend. Mesut Ozil, Petr Cech, Coquelin, Ramsey, and co. Be aware of the competition breathing down your neck, step it up like they have.