Four years prior to joining Arsenal in 2010, Laurent Koscielny was at Guingamp, and struggling to enforce himself on his coach’s plans.

The speed of his rise from the doldrums of French football is staggering – and testament to how good Laurent Koscielny is, and how large his pocket has become. 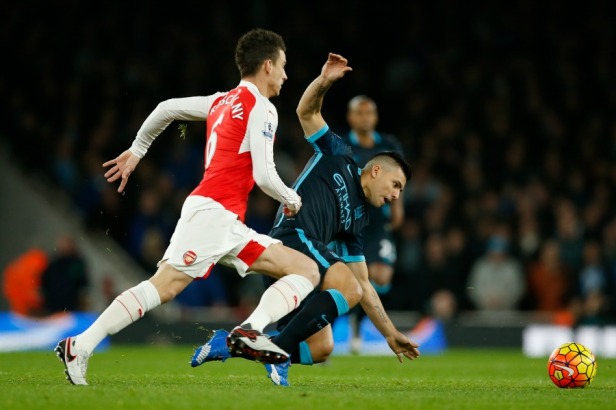 Koscielny in 2006, thought of himself as a right-back, but he was spending more and more time on the sidelines. He took the brave decision to drop down divisions to allow himself minutes on the pitch, so a transfer to Tours in Ligue2 transpired.

The coach at Tours moved Laurent centrally, and the chemistry at the club was a potent mix, seeing Tours promoted. His impressive displays for Tours saw him given a crack at top-flight French football, as Lorient came calling.

One season at Lorient was enough for Wenger to make a move in 2010, and since that moment, Koscielny has gone on to show that the rapid rise of his career is more than justified.

It took Laurent four years to clamber up the divisions and ply his trade in the Premier League.

It took another four years for people to finally realise that Laurent Koscielny is the real deal – and perhaps the finest exponent of defending the Premiership has seen for quite some time.

His first two seasons saw flashes of what was to come, but it was his instances of rashness which garnered most headlines, somewhat unfairly, but at times it cost Arsenal dearly. These rushes of red mist were painstakingly ironed out, game after game, and what was left was an accomplished defender who was well aware he had the recovery pace to deal with any potential danger or mistake.

Consistency was intertwined with talent, and a quiet air of confidence. The last two seasons though, have seen his reputation skyrocket. Performances in Europe and against the cream of the Premier League in which Koscielny has nullified strikers whose reputation precedes them, has rightfully put Koscielny on a pedestal. This pedestal is a benchmark of sorts, and all defenders must use his level to define where they stand in regards to cutting their teeth at the very top level.

Our defensive lynchpin has obviously benefitted from some great partners, and it cannot be understated the role Per Mertesacker has played in his development, but more telling is the list of players he has had to carry alongside him.

Johan Djourou, Philippe Senderos, Sebastian Squillacci are just three who made Koscielny’s job inexorably harder, and now he has the delightful Gabriel to add to this list perhaps, after the Brazilian showed last season that he is far from the finished article.

Koscielny, for a defender who is perceived as quiet and unassuming, has at times single-handedly, dragged his team over the line. His displays for his country at Euro 2016 were titanic, and considering that his partner changed regularly – and that Laurent isn’t even first choice himself – then it adds even more lustre.

So many strikers and attackers are currently languishing in the cavernous prison we enjoy calling ‘Koscielny’s pocket.’ Cristiano Ronaldo, Messi, Suarez, Aguero, Muller et al – the leading lights of football attacks the world over have at one time or another been rendered moot by the imposing presence and defensive merits of Laurent Koscielny.

Just look at his imperious display in the recent 3-0 win over Chelsea, and his flawless handling of perennial panto villain Diego Costa.

Koscielny is a big game player. The larger the occasion, the heavier the pressure, the more that our Frenchman rises to the fore. North London derbies, must-win games – Koscielny invariably comes up with the goods at one end of the pitch or the other.

When the chips are down, our silent defender needs not shout his troops into order. They must simply aspire to his appetite for victory, which is immeasurable.

4 thoughts on “Koscielny and his Ever-Growing Pocket.”