With the impending TV deal set to not only revolutionise Premier League football but change every parameter, fans may well revel in the dreams that the cash can create.

Every team that participates in the Premiership can now duke it out with the big boys in terms of transfer fees as coffers swell with TV cash. There are drawbacks however.

As each European club braces itself for the slew of bids for its stars by pumping up prices, it also means that the Premier League will have more imported players – which means the already miniscule chances youth players have of reaching the top shrink rapidly with every import that is brought to these shores.

So we should embrace every youngster who bucks the trend and squeezes through the doors to force their talents upon the Manager.

A true success story of the Arsenal Youth Academy and scholarship scheme. Despite the plethora of starlets that come through the system at London Colney, there have been precious few who have been at the club from such a young age and gone through every stage of development to grace the first team.

Alex Iwobi has been on Arsenal’s books since he was eight years old. Born in Lagos, Nigeria, he came over to the UK with his family, and his talent was so obvious, that Arsenal put him on their books whilst he was still in Primary School.

The odds are stacked against any youth prospect making the grade, and this is made obvious to the young charges from the outset, but one thing to be said for Arsenal’s youth setup is that the majority of them do go on to make a career at some level of professional football. to make it at Arsenal though, the bar is high.

It isn’t only football that Alex Iwobi and his comrades had to excel at, as the education given to them is mandatory and must be passed. Not only this, but every youth teamer is schooled in coaching and given the UEFA Level 1 and 2 Coaching badges – so if they fail to make the grade on the pitch, then they can find work in the sport off the pitch.

It is a hell of a workload for these kids, but it is testament to Iwobi that he is where he is today.

The Nigerian started his meteoric rise to prominence last season, when he scored nine in nine for the Under21 team. This gave him the opportunity to go to the pre-season Barclays Asia Tournament, in which he scored and generally impressed.

He had to wait for his first team shot though. It wasn’t until October this season that he was put under the microscope, and from there – whenever he was called upon – he never let Arsene Wenger down.

As is always the case with Arsenal, injuries took their toll on the squad, and this was a blessing to Iwobi. He was thrust into the spotlight and in recent games, he has started both against Barcelona and Everton – both high profile fixtures.

What really stands out when observing Iwobi, is that for a nineteen year old with relatively no experience, he looks completely at home next to players of the ilk of Ozil and Sanchez. With the ball at his feet, he can slalom past defenders and perhaps his most prized feature – his decision making, thus far has been nothing short of exemplary. The temptation to panic when rushed at for a youngster must be high, but the composure of this lad is startling.

His goal against Everton showed that he may just end up as a forward in the future, such was the nature of his finish past Joel Robles. His run from wide was also indicative of his instinct for goal. What will form his future at Arsenal though, is injuries to his teammates and prospective transfers. 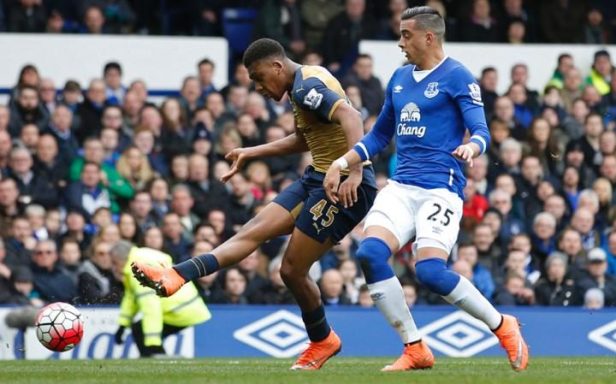 At this moment in time, he will act as backup to whoever in the attacking positions is absent. His versatility could end up being his enemy, but he has shown more than enough in his locker to reassure fans that he can make a fist of a career as a Gunner.

He has pace, he is comfortable on the ball, and his passing lends itself to our style of play. Iwobi, if he has the hunger, can go an to forge an amazing career at The Emirates.

From the tender age of eight, he has been driven to get to the place at which his career now resides. You can bet that he won’t give it up in a hurry.

He is one who has jumped over every hurdle he has faced, and is Arsenal through and through. Whether it be wide forward, striker or playmaker, Alex Iwobi deserves every bit of acclaim he gets. He gives hope to the kids now playing for the youth teams. If you give everything, then you too can make the grade. Credit to the coaches must be given, but Iwobi is the one responsible for his stunning soar towards stardom.