The midweek loss to Barca was far more than yet another Last16 exit in the Champions League.

It represented Arsenal finally turning a corner in their arduous search for a semblance of form. Making the ball do the work rather than the man, movement and innovation – the Gunners may have lost the game but they at least put in a performance that showed that they may just have trudged through the mire and were able to clean off their boots.

This 2-0 win, away from home against a dangerous Everton side, means that the next eight games can be looked upon with a little optimism, rather than trepidation. 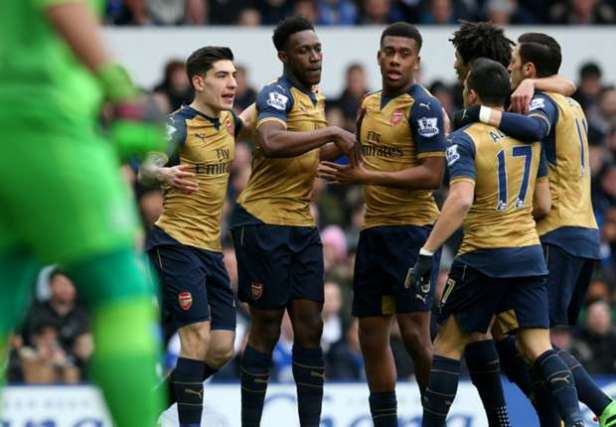 It probably has come about three or four games too late, but Arsenal dealt with threats all over the park, crucially have players returning to form and have backup players performing at a standard where the regulars they have replaced aren’t sorely as missed as they were during the awful period we suffered in February and early March.

Alex Iwobi – who impressed against Barca – was handed his first Premier League start, slotting into the left hand slot, with Sanchez on the right. Danny Welbeck, the man in form, started up top yet again, and Francis Coquelin was alongside Mohamed Elneny in the centre. Gabriel was preferred to Per Mertesacker as the threat of Romelu Lukaku loomed large.

Everton started well, a few threats from their right hand side were quelled by cutouts from our defenders, but Arsenal drew first blood.

Alexis Sanchez picked up the ball about twenty five yards from goal centrally, and slipped a quite perfect ball through to Danny Welbeck, who had ghosted past Everton’s central pairing of Jagielka and Funes Mori. His first touch poked it past and onrushing Robles, the other hooked the ball into an empty net.

From then, it always looked like Arsenal were going to add to their tally. Sanchez nearly punished a dallying Funes Mori by robbing him and playing in Iwobi, but his drive was snaffled up by Robles.

Arsenal were overrunning the Toffee’s midfield, with Coquelin and Elneny tireless in their efforts to grab possession and distribute effectively. The main difference though, was the speed in which they did so. Unlike the pedestrian efforts of recent weeks, whenever the ball was at our players feet, we looked to move forward, rather than formulate a plan whilst with the ball.

On the cusp of half time, Arsenal finally got the second goal which their display deserved. Another Everton attack broke down and Hector Bellerin picked up the ball in his own half and got his head up, searching for runners. The ball was again distributed swiftly, this time over the top of what little resistance from Everton remained. The ball was perfect for the rampaging Alex Iwobi, who controlled magnificently whilst on the run, cutting in past his man and then delicately putting the ball between Robles’s legs. 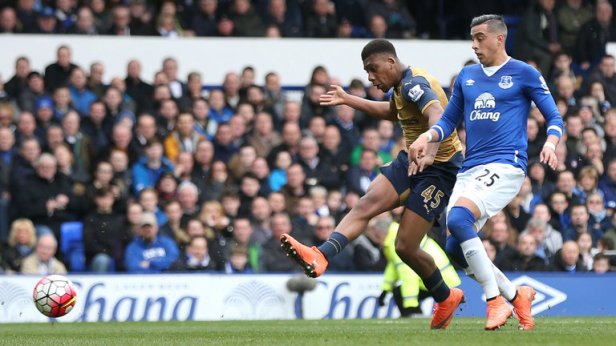 If the goal was from Ozil or Sanchez, then we would have been raving about it, so it is important the young Nigerian gains the credit he deserves. He linked up well with the rest of the attack, his touches no less composed than his more illustrious compatriots. He really is making leaps and bounds, his progress quite staggering.

Upon the half time whistle, it was a brilliant job thus far. The second half was thankfully, more of the same.

Chances were created, unfortunately squandered, but the difference this time was that we defended so well that we weren’t made to pay for it. Gabriel put in a good shift, his rash nature not on show as he combined well with Laurent Koscielny to craft a pocket large enough to house the large Belgian. Whenever Lukaku picked the ball up, there was always an air of danger, but our defensive pairing were effective and did the simple things so well. It was an ample foundation from which to build.

Francis Coquelin clocked up 12 interceptions during the game – a Premier League high in the last three years – and it seems a budding partnership is in the works. The robust nature of Coquelin and the more refined play of Elneny work well together – although it must be stated that Coquelin can pass as well as tackle and Elneny is just as good at the defensive side of his game. They are far from one-dimensional, but they understand their roles and they steamrollered Mohamed Besic so much, that he was hooked at half time for John Stones.

David Ospina picked up what appeared to be a painful knock in attempting to cut out a cross and being squashed by Lukaku. He carried on, but it nearly cost us as he limped toward a corner which Phil Jagielka put over as Ospina was in no mans land. He had another assured display and hopefully he will have a clean bill of health for the next game versus Watford.

Another who picked up a knock was Mesut Ozil. He was taken off as a precaution, and Arsene Wenger assured us after the game that it was a simple knock, but Ozil is so instrumental at keeping our attack ticking over that even one game missed could be pivotal.

The second half came and went – no incidents of note, but we comfortably kept the Toffees at arms length, whilst in turn, creating opportunities ourselves, and then full time was upon us. It seems inconsequential, but for a half to fly by without catastrophe after the run we have had is not to be sniffed at.

The complete away display, with our power players in Ozil and Sanchez playing well, our partnerships seamless and young Iwobi on fire. Danny Welbeck has another goal as just reward for his non-stop effort and our midfield are turning the ball over regularly. Time for a spot of positivity for a change.

The signs are good for a strong run-in, and the next game is in two weeks thanks to the international friendly break. In that time, we must hope for no injuries and the same intensity present from kick off that we had yesterday.