Luck is a fickle mistress.

Just ask Mathieu Debuchy. Upon signing for the Gunners in 2014, he gushed about joining Arsenal and he set about showing Gooners why Arsene Wenger’s judgement was excellent in his acquisition.

For the first couple of months of his debut season in an Arsenal jersey, all was well. The French right-back was putting everything he had into every game he played. He was more than solid and allayed any fears Arsenal supporters had about the departure of long-term servant of the club, Bacary Sagna.

Then, his nightmare began.

He was fast becoming a pillar of the team. Dependable, defensively sound and with reliable distribution. He then suffered ankle ligament damage in the September of that year, which ruled him out for roughly three months. In that time, Hector Bellerin began his meteoric ascendancy. However, when Debuchy returned, his slot as first choice right-sided defender wasn’t lost completely.

Bellerin had of course sent jaws around the land crashing to the floor with a series of attacking displays that belonged in the higher echelons of the game. His searing speed offered something different that Debuchy couldn’t. Whilst his mastering of the defensive arts was going to be a long road, he was far from a weak link. Debuchy, whilst crocked on the sidelines, could see his spot in the team slowly being stolen.

It must have been torturous for him, but upon his return to the team, he slotted back in after regaining his sharpness. The reliability he offered in both defence and attack was a soothing balm to the red hot, fly by the seat of your pants style of his young Spanish rival.

For approximately a month after his return from injury, Debuchy was once more asserting his authority in the team and ultimately, over Bellerin. Of course, Hector Bellerin was the future, his electric performances were evidence of this, but Debuchy could still offer a little more balance and nous in the role.

It was then that Lady Luck intervened once more.

Debuchy was injured a little over a month after returning from the previous injury. A match against Stoke City was when his Arsenal career veered suddenly toward the skids. A ball heading out of play was being ushered safely off the pitch when he was thuggishly shoved from the field of play. Such was the force he pushed that it dislocated his shoulder upon impact with the floor and little did we all know that he would be missing for another three months. 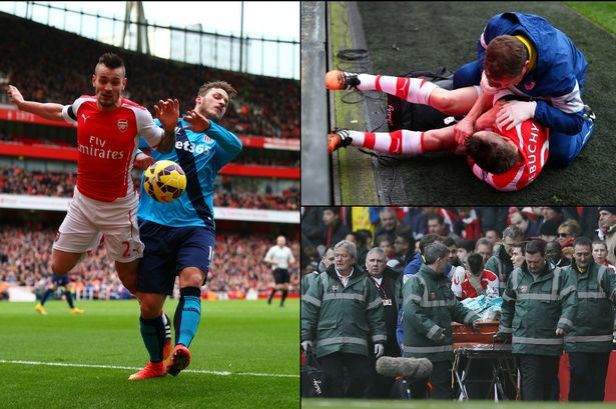 Debuchy returned to action in April of that year, but the cumulative effect of missing six months of a season and the abilities of Hector Bellerin meant that the F.A Cup Final spot he would have been dreaming of was lost. Bellerin had been handed the chance to play and grasped it. Undoubtedly, the pressure to perform was high but knowing that his main rival for the right-back slot was injured for such a time meant that Hector had the time to iron out any major flaws.

Last season was Debuchy’s dream and nightmare all rolled into one. Through no fault of his own, he started as France and Arsenal’s first choice, and at the time of writing, he finds his position at his club untenable if he wishes to take part in Euro 2016 for his country.

What a fall from grace for the Frenchman. Frustration would have been his go-to emotion at the start, but he has stopped short of demanding an exit. The longer the season progresses though, the nearer his home nations tournament inches. So, what are his options?

If he stays put, he relies on the variable that affected his debut season at The Emirates – luck. He would require Hector Bellerin to suffer an injury before he could reclaim his spot. No matter how much he puts his head down and focuses on dislodging his Spanish teammate, the simple fact is that without luck intervening, Debuchy will sit on the sidelines.

His other option is to exit the club. Whether that be on loan until the end of the season or permanently, is entirely in the air. Potential suitors have been bandied around by the media, but it looks like the Midlands are his likely destination, with West Bromwich Albion and Aston Villa being mentioned.

These two clubs would provide the gametime he needs in order to fight off the competition for his France jersey. Undoubtedly, Debuchy would prefer a move to the Hawthorns, seeing as Aston Villa are a ship that has its hull breached. At this point in time though, if his agent can guarantee minutes on the pitch, then both clubs remain a viable option.

A loan move until the end of the season would suit both Debuchy and Arsenal. The club would prefer to have Debuchy as a back up to Bellerin as the Frenchman would enter the lineup seamlessly and provides experience. Debuchy would enjoy seeing out the tailend of his career collecting wages he wouldn’t be earning elsewhere and in surroundings that are comfortable and desirable.

Luck has curtailed what promised to be an excellent Arsenal career. It also ruins what may have been a lasting legacy. His performances prior to his spells on the treatment table promised so much, but yielded an underwhelming amount. It only proves that talent provides little in the general scheme of things when it comes to success. In Debuchy’s case, a match against Stoke City, a dash of thuggery, and a youngster destined for the stars all came together to ruin what could have been a match made in footballing heaven.

West Brom or Aston Villa, wherever he goes, he will show his credentials.