The premise was simple. Win by two clear goals. To progress from the Group stage once again – a constant since 1999/2000 – and exorcise the demons that had lurked since the reverse fixture at The Emirates. Arsenal needed every man to step up.

They required someone to step forward and change history. The man to do it has been ridiculed. He even had his own preposterous hashtag which symbolised the exasperation which sometimes follows him around during matches.

When it mattered though, the man who had the mettle to rewrite Arsenal’s European fate was Olivier Giroud.

In regards to the team, the surprise inclusion was the recently returned Theo Walcott. The England whizz came back to first team football with a brief cameo from the bench during the Gunners win over Sunderland the previous weekend. So to see Walcott start was maybe Wenger using his ace in the pack. He started wide on the right and with Giroud in the lone striker role, gave Arsenal more than enough firepower. Throw into the mix the recently firing Joel Campbell – a former Olympiacos player on loan – and Mesut Ozil loading the chambers of the Cannon? Well, it seemed that Arsene was intent on at least giving the Greek defence a torrid ninety minutes.

Or at least enough to grab the initiative. Arsene, when pushed on Walcott’s fitness, stated that Theo didn’t have ninety minutes in him right now. With Oxlade-Chamberlain on the bench as a handy replacement on the right hand side, Wenger will have been hoping that an hour of Walcott’s searing pace would be enough.

The injury curse had a nibble before the referee even placed the whistle to his mouth – and it was a scare that left all Gooners chilled to the core. Rumours circulated regarding star playmaker Mesut Ozil – who has been a revelation this season. It was mentioned he may have broken down thanks to a knock suffered in the previous game but Ozil started and had plenty of the ball from the start.

Despite the pressing need for Arsenal to score goals, it was Olympiacos who started the better and were occupying more of the ball than the Gunners at first. Nerves obviously playing a part but the Greek side were keeping the Gunners at arms length initially.

The avant garde Flamini – who was not being the shield Arsenal wanted or needed – found himself on the end of a Joel Campbell cutback from the right. A slight deflection saw the ball crash off the bar and a raft of sighs and anguished noises emanating from London could be heard. Probably.

This was a wake up call of sorts. The first twenty minutes it seemed as if Arsenal couldn’t decide on the approach to take, but the woodwork coming into play was the start of a passage of play where the Gunners made a host of chances.

Then, on twenty nine minutes, Arsenal took the lead.

Mesut Ozil played an unbelievable pass to Nacho Monreal, who dug out a cross which an unmarked Olivier Giroud met with a firm header. The front post is where the Frenchman met the ball – much like for his goal against Sunderland – and the front post area is where he seems to be strongest. The Olympiacos goalkeeper got a hand to the effort, but the ball spun off the turf, hit the keeper on his cheek and into the net. 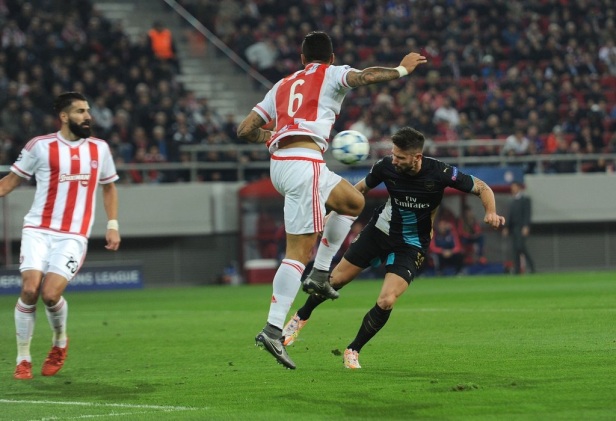 It was all about Ozil’s pass  to Monreal which provided the opening, but it was fortuitous that the ball spun into the net. Gooners weren’t fussy though, and neither were anyone connected to Arsenal. It was exactly what they wanted and the perfect platform to slowly crank up the pressure on the home side.

Should Olympiacos sit back and protect their goal? Or should they flex their attack and get a goal which would surely end Arsenal’s Euro dream?

Momentum see-sawed after the goal, with chances at both ends. Mathieu Flamini, who runs on passion as we all know, slowly started to be lured by his attacking instinct and forgot  his role as defensive midfielder. With Aaron Ramsey linking up so well with Giroud and Ozil to such great effect, this was leaving gaping holes for Olympiacos to utilise, but the Greek side were rattled. They couldn’t seem to penetrate the Arsenal backline and Wenger’s men were gaining control as the half wore on.

Arsenal could smell glory, but the referee stepped in to protect an increasingly punch drunk Olympiacos team with the half time whistle.

So far, so good for Arsene Wenger and his team. A goal up and only needing one more to qualify in place of the home team left the Gunners in a promising position. As long as they could continue to shut out their opponents, then they could achieve the improbable.

Straight from the off, Arsenal could smell blood. Four minutes from when proceedings began again, Arsenal had the second goal they so craved.

Mesut Ozil, once more the difference maker, lofted a diagonal pass into the box which Joel Campbell’s pace allowed him to latch onto. Immediate pressure on the Costa Rican meant nothing to a growing Campbell, and excellent control and strength saw him slot in a pass to an onrushing Giroud. The pass was Bergkamp-esque and inch perfect. Giroud – who only minutes before had rolled his ankle hazardously – slotted confidently past the keeper and his goals were allowing Gooners to dream. 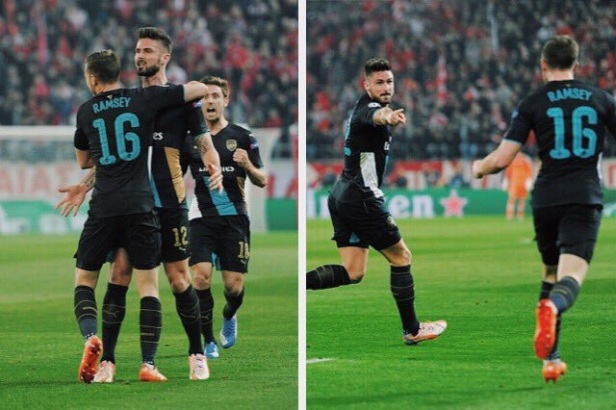 With not a minute to catch our breath, Arsenal could have sewn it up, but Theo Walcott’s rustiness showed when composure at the back post was needed. Instead, he lashed wide of the goalframe.

Mathieu Flamini had obviously been warned during the half time break about his positioning and a great tackle denied an increasingly desperate home side a goalscoring opportunity. A minute later, Petr Cech saved with his wrong hand to keep the precious two goal cushion. The mission was still on. Just.

The Gunners deserved their lead and they had grown in stature as the game went on. Their European experience was starting to show but Theo Walcott was having one of his more frustrating performances in an Arsenal shirt, with another chance going begging as he was caught in two minds whether to supply Giroud for his treble or go on his own.

It wasn’t only Walcott that was providing Gooners angst, with the match official failing to keep up with play and gifting Olympiacos needless soft set-plays which was effectively breaking up Arsenal’s momentum.

The referee wasn’t completely biased however. A trailing arm on a sliding Greek defender meant that Arsenal had a chance to wrap up a historic victory. With regular penalty kick takers Santi Cazorla and Mikel Arteta crocked, it gave Giroud a chance to bag his first ever Arsenal hat-trick.

Nerves of steel gave the Gunners a three goal lead and meant that Giroud had his treble. Much maligned by many, he exhibited exactly what he brings to the table and also showed when the pressure is cranked to the maximum, he can be relied upon to get the goals.

Time to shore up any apertures in the lineup, and Theo Walcott – full of endeavour but ultimately lacking the sharpness his game normally provides – made way for Keiran Gibbs, who could form a great barrier with the ever-impressive Nacho Monreal down the left flank.

It wasn’t just the Giroud Show however. Mesut Ozil was clearly enjoying himself, pulling the strings behind the scenes, and Arsenal’s backline had been reassuringly efficient. One player who deserved some plaudits though, was Joel Campbell. Full of running and displaying a composure on the ball that seemed amiss when comparing his earlier games in an Arsenal shirt, the Costa Rican had perhaps his finest hour for Arsene Wenger and he may just be earning a more permanent place in the Manager’s plans.

The Gunners comfortably saw out the remaining minutes, the only event of note was Joel Campbell being replaced with mere minutes to spare, to applause from both sets of fans. Oxlade-Chamberlain was given no time to impact on proceedings and soon enough, the whistle blew which meant Arsenal had slid into the knockout stages.

From the precipice of elimination and the ignominy of the Europa League, Arsenal instead chose to show their fighting spirit and ability under pressure. This performance deserves to be remembered fondly, it was a performance which had everything.

Arsenal live to fight another day. Some players were absolute giants on the pitch, but the Gunners saving grace was a man who may finally have earned the respect his stats warrant.

Hat-trick hero Olivier Giroud goes back to London with the match ball, content in knowing his side live on in Europe, thanks to him. Finally the spotlight is on him for his footballing exploits rather than his visage!