A 19th Cup Final is now in our midst after a fraught win requiring extra time under the arch of Wembley Stadium.

Arsene Wenger before the match referred to his “love story” with the oldest Cup competition in football – and he can also look back on yet another semi-final which teetered between triumph & tragedy so delicately.

Aside from the Cup win of 2005 Vs Manchester United, every Semi-Final win was achieved by a slender single-goal margin or in last seasons case – spot-kicks. It would seem tradition is something that runs through every vein of our club, including results.

The match saw a line-up that took nothing for granted, despite our opponents lowly League position. Aside from Gibbs, Debuchy and Welbeck in for Monreal, Bellerin and Giroud – and the continuation of our ‘Cup Keeper’ schedule which saw Szczesny between the sticks – the team rolled out onto the Wembley turf stronger for their excellent League form and surprisingly fit squad.

A boost was also to be found on the bench, with Jack Wilshere finally being able to claim full fitness after several run-outs for the Under-21’s with Abou Diaby and our Captain Mikel Arteta. Our team was in rude health in every sense of the word.

The match though, despite a plethora of optimistic pointers, panned out in a methodical manner which normally sees our team struggle a la Monaco and last seasons awful encounter with then Cup holders Wigan.

Ramsey starting on the right of midfield can be rather effective when linking up with Giroud, but he became mired in scrappy play. The same can be said for Welbeck, who started to drop deeper and wider to influence proceedings.

Even Sanchez induced frustration with his insistence on keeping the ball for that extra second to beat an already humiliated opponent. The negative feelings didn’t last long though, as the ice-cool Özil found the tireless Chilean with a lofted ball into the box. He controlled the ball from the air, beat his marker before adapting his feet in such a way to shoot the ball early, which was enough to befuddle Federici. 1-0. 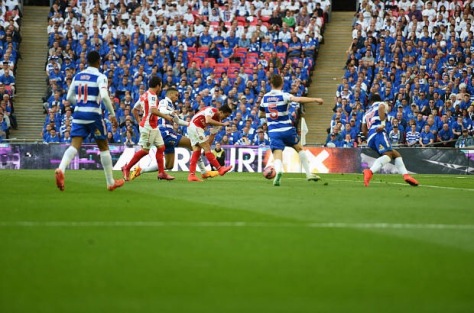 It would continue that way past the half time whistle. The 2nd half though, signalled the inevitable pressure which we seemingly invited upon ourselves. Reading, Jamie Mackie especially, ran themselves ragged in an attempt to claw themselves to an even footing, which they achieved thanks to Mccleary finding a pocket of space at the back post to fire a first time effort toward goal. The speed of the shot, a cruel deflection off Gibbs and a slight hint of tardiness to get into position combined to rob Szczesny of his clean sheet.

The same old story. Another semi, another tale of an adversary  who was brimming with endeavour but lacked the sparkle to really cleave open our hesitant defence.

We invited them to attack but we continued to press them. We needed someone to hold the ball so reinforcements could arrive. On came the perfect man to initiate the one-two’s and intricate passing and moving we had tried and failed to pull off. Giroud arrived in place of an unfortunate Welbeck.

It worked. Ramsey seemed far more effective now his partner in crime was on the field. Worryingly though, our Skipper for the day Mertesacker, had to be subbed due to injury, with Gabriel taking his place.

All to no avail though, as the full time whistle blew with the scores still level. Not for long.

Sanchez, who once more proved that not only does he give an unpredictable edge in attack but is also a brilliant first line of defence, took matters into his own hands after 15 minutes of hand-wringing nervousness for us fans.  Receiving the ball out wide, a now wary Reading defence backed off the perilous South American. He ate up the space and, upon seeing no options but now in the box, swung his monstrously muscled leg. Federici, who had earlier kept out a venomous  Gabriel header, could only funnel the shot through his legs and – in what seemed like torturous slow-motion, watch as the ball trickled over the line.

It was enough – and every Gooner attending, every Arsenal fan watching on TV or via internet stream – would have taken it before kick-off. We saw a fleeting appearance of Theo Walcott who helped to run down the clock and then the shrill blast of the referee’s whistle signalled the continuation of our attempt to hold onto the Cup.

Every fan should’ve been satisfied with transit to the Cup Final. It wasn’t the prettiest and it was arduous to watch, but Semi-Finals are a means to an end. They are simply there to win no matter how it is achieved. Our record is rather admirable with hindsight. Not one person will look back on this Cup campaign in 20 years and point a critical finger at the manner of our win.

Currently though, I’ve seen words of discontent regarding team selection, ease of the win and margin of victory. Pretty ridiculous in my humble opinion. We’ve achieved another Cup Final and got past a foe which put every fibre of their being on the line. Of course we should expect to beat lower league opponents,with our squad we should aim for supremacy in most games, but we are through. I for one am more than happy.

One look at our past semi-final results tells you what we should have expected – and it indeed came to pass. We’ve emerged unscathed and can now look forward to hopefully recreating another heavenly Final outing akin to last season.