With Last 16 ties Vs an era-defining Barcelona, an AC Milan filled with world-class talent and two ties against a Bayern Munich side led by Pep Guardiola and a recent domestic record to instantly instill fear within opponents – Gooners could be forgiven for thinking that a two-legged knockout game against a modest Monaco side represented the best chance Arsenal have had in recent memory to finally make the Quarter-Finals.

The fans could be forgiven for thinking it, but not the players.

Arsene Wenger had a soundbite from his Press conference on the eve of the match. He mentioned that there were no easy games and his team had to remain cautious, despite the media keen to paint Monaco as also-rans. With hindsight, Wenger’s comments take on prophetic qualities..

Looking back on the match, it is easy to say that from start to finish – Arsenal were diabolical. Even Gary Neville, co-commentator on Sky Sports coverage and dispenser of usually sage observations, was not reserved in his criticism. He tore into Arsene’s side from the start for not dictating the pace and sitting back. Ultimately, it was our ponderous approach that cost us the game.

For the first 35 minutes, Arsenal had the majority of possession, which was expected. Gooners have become accustomed to a Jekyll and Hyde type team this season but for the early portion of the game, the passing and probing that was needed to unlock a defence that should be given the tag ‘formidable’ this season was apparent. Santi Cazorla and Ozil had no fixed postion but were floating where necessary in a vain attempt to spy an opening. Every time a cute pass was on its way to Welbeck or Giroud however, it was snuffed out. The movement of our attacking players became a little static and a lackadaisical malaise was evident amongst Arsenal’s attacking players. Then the goal that fundamentally changed the tie rocked the Gunners to the core.

Kondogbia – instead of prowling his defensive third, found himself with the ball and approximately 35yds away from Ospina. He had no options to speak of but more pressing was the fact that no one was closing him down. He ambled forwards for a few yards and opted to leather the football goalwards. A small nick off of the abdomen of Per Mertesacker was all it needed to completely befuddle a now prone Ospina and Arsenal now found themselves a goal down. An AWAY goal down. 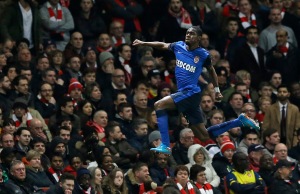 The rest of the game changed completely. The patient play of earlier was replaced by a bloody-mindedness to get back on level terms. More men were now swarming forward to grab back the initiative and Monaco could not have been happier about this.

Once Kondogbia’s shot went in, Monaco were perfectly set-up to utilise their strengths. Their defence and covering midfielders had shored up any gaps and the pace of Martial coupled with the guile of Moutinho always allowed an outlet on the counter-attack. Five minutes after half-time, so it proved.

A harem-scarem approach to attacking left Per Mertesacker with the risky option to reclaim possession high up the pitch. He failed and left his team completely vulnerable. A waiting Berbatov collected the ball and smashed it past an unremarkable Ospina to leave a miracle needed in the small principality. 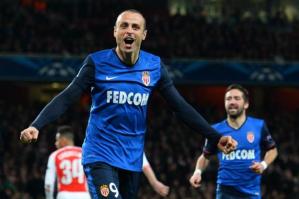 What happened for the next thirty minutes was a catalogue of misses from Olivier Giroud and familiar pressure but with no end product. This was partly down to poor performances from Ozil and Cazorla but also down to Monaco defending as stoutly as Wenger had foretold.

Theo Walcott and Oxlade-Chamberlain were introduced in a move to introduce some pace to proceedings and eventually Monaco’s resistance caved somewhat, with The Ox placing a wonderful curling shot into the corner of the net from range. It gave Arsenal an undeserved fighting chance in the second leg. That was until Carasco, a 2nd half substitute, took advantage of woeful defending to slam a shot into the far corner and essentially book progress to the Quarter-Finals for the unheralded French side.

The final whistle brought about accusations and finger pointing, a reason being needed for such a horror show when so much was expected. It was a mixture of reasons why Arsenal capitulated so badly at the same stage as the last four seasons.

Olivier Giroud, who has been excellent since returning from injury, had his worst game in an Arsenal jersey. Six chances went begging, some easier than others. Three opportunities were spurned at the front post which is Giroud’s preferred hunting ground. If he had put away just two, Arsenal would be in a far more contrasting position. 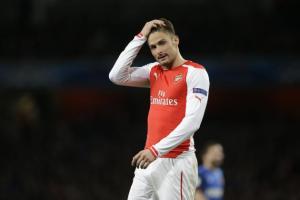 Mertesacker had a performance that was as if he was Pascal Cygan and Igors Stepanovs’ love child. Normally an astute reader of the game, he left gaps and was often second best in challenges.

Mesut Ozil, Santi Cazorla and Alexis Sanchez, normally the three that Wenger looks to for inspiration – were insipid and easily shackled by Monaco’s defensive General’s.

The fact that more than half of our team chose this match to have the worst showing in their Arsenal career formed a banana skin of epic proportions. Add this to the fact that after the deflected goal went in, the game was set up perfectly for Monaco to pick off an increasingly desperate home team.

Gooners are a divisive bunch at the best of times, but even the fans at the most extreme ends of the spectrum can agree that this result against an opposition that is at least a rung below where Arsenal stand – is simply not good enough. Chances went begging and defensive howlers were responsible for this reversal of fortunes but it wasn’t errors from singular sources, it was a team ethic that cost Arsenal.

Even when two goals down, there was no more purpose injected into the attack. Just more panic. A team that has been present against the elite of European competition for the better part of twenty years should exhibit a little more nous and cunning than was on show on Wednesday night. Wenger after the game harshly criticised his team for naivety. Whilst Wenger will shoulder the blame from the fans and media, he should escape vilification this time. He set up his team to play a savvy, counter-attacking European team. His team went a goal down through unfortunate circumstance and this played into Monaco’s hands. Instead of following the ethos which Arsene champions, his team went about the growing task like headless chickens, showing a flagrancy for the threat which Monaco posed and also the problems they set Arsenal’s attacking quartet.

A naivety in defensive organisation and disregard for their opponents talents was the weapon which downed Arsenal this season in the Champions League. Not Messi, not Ibrahimovic nor Robben. It was all their own doing.

For the first thirty minutes, it was rather comfortable. Arsenal had the majority of possession as was expected. The pace was slightly more pedestrian than Gooners are used to, but with Monaco boasting a fine defensive record domestically and throughout the Champions League Group Stage, patience and probing were the key that would unlock the French side’s backline.