The League Cup Semi Final 2nd Leg featuring Chelsea and Liverpool brought to the fore an issue that has pestered Professional Football for too long, rearing its petulant head with unwanted regularity. No, not the Stevie Gerrard Fan Club. The problem is stamping. 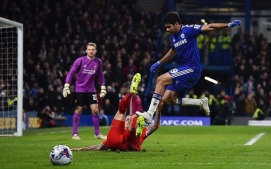 With Diego Costa’s ‘challenge‘ on Martin Skrtel came a wish from the native Brazilian Brazilian to cause injury to the Slovakian defender.

In any other profession this would be frowned upon. Imagine if you will an office worker, sloping into his booth to once more crunch digits that truly make no mark on an inconspicuous world. He sets down his coffee, sighs and sits down on a chair that has seen this pitiful routine far too many times. All of a sudden, a colleague two booths away hurtles toward this empty vessel of a man. the runaway office worker then proceeds to two-foot the sad-sac and send him writhing into orbit.

That may have been an exaggeration and quite a terrible example.

The point I’m altogether missing is that if the intent to cause pain, or even maim, an opponent is quite clearly evident, as it was in the case of Costa Vs Skrtel, then the punishment should be such that it would induce reprimands from the clubs that pay them.

If the punishment was of such a hefty weight that it would force retributions from club Managers – say a monetary fine for each game missed – then coupled with a longer ban, this would surely prove to be a far more effective treatment for violent conduct than the current regime.

Quite obviously, the punishment meted out for a two-footed lunge or a swift elbow to the face is not enough to dissuade these players from carrying out such acts. So hit them where it hurts – even if it is a tad convoluted. Let me explain.

Let us revisit the assault on Skrtel – for that is exactly what it was. If the castigation for such a crime was a longer ban, then that would mean a club losing the services of the player for an extended amount of time rather than three games. If it was a mandatory five game ban minimum, then the club would be forced to fine the player as they would miss a sizeable chunk of the season and therefore would not be fulfilling their contractual obligations.

The monetary fine will never be enough to break a habit. Fining a player who has enough money to buy every cow in Britain a Ford Transit and a lifetime supply of Creme Eggs is about as useful as buying contraception for Katie Hopkins.

If however, it ranged from a month to two months pay that was taken from the clutches of the player who so readily implanted their studs upon the flesh of another? I think that, along with the longer ban, would weigh heavily upon the minds of any pro footballer that ever has the idea to hurt another on the pitch.

Why aren’t we more outraged by this brutish action? Is it due to the fact we have been desensitized by constant viewing of these instances? Have we forgotten the repercussions of such horrific moments of savagery? It may look like I sway towards amateur dramatics when I type it in such a manner but the fallout can be horrific…

Eduardo suffered the wrath of an over-zealous and some would say thuggish – Martin Taylor. The tackle didn’t involve two feet but was so late that Network Rail were rumoured to be behind it. The result of this assault? Not only did Eduardo miss a year ( one week shy of a year to be exact ) of playing time, but the Eduardo of old never came back and was subsequently sold. What price on this?

Another instant is the Shawcross tackle on Aaron Ramsey. The consequence of the Stoke defenders foot crunching through our Welsh starlet’s tibia and fibula was severe and required another lengthy lay-off, a whole lorry-load of rehabilitation and character-building, not to mention a fair few games to regain what was nearly lost.

What will it take for the F.A to put in place a framework that shows they take this a tad more seriously than they do currently? What doesn’t help is the actions of Mourinho who doesn’t simply deny seeing it, which is a trademark of our Gallic Manager, but to admit they had seen the incident and proclaim that it wasn’t malicious. This shows a complete lack of respect for the injured player and the game itself. It doesn’t matter that my player has created a blood tattoo on the defenders leg, he is entirely innocent. 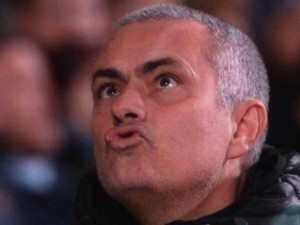 It is time to address the shortcomings in regards to violent conduct. If it represents a risk to a players career, then the crime should be met with swift retribution. Something that will send a message to any potential hatchet men. If a player that is inflicted with such a hazardous tackle or a brutish swing of an arm can be seriously injured then the chastisement must be enough to send a message.

All it takes would be a sprinkling of common sense and a panel of level-headed ex-pro’s and match officials. With time to pore over the incident then judgment should be easy. Sense and time to act. That is all that is required.