This season has seen the continuation of an enigma that our manager seems unable to solve.

Our midfield is an unoptimised machine that jars and shudders at crucial times in games. In figurative winters for our midfield, we turn the ignition but there is no spark – we are immobile.

We can be bypassed with a simple cutting pass and the moving parts that comprise our engine room are out of synch. Muddy waters blur the roles for our midfield pairing, and Granit Xhaka and Aaron Ramsey have so far sought the mysterious substance that gels pairs together with little success.

Since Mikel Arteta departed from The Emirates and Santi Cazorla started to battle his plagued ankle, we have used various combos to little effect. When compared to Chelsea, Man United and even tottenham, our midfield pales in comparison.

Where does the problem lie though?

At the time of writing, Premier League stats showed that Granit Xhaka was the third highest successful pass maker in the entire League. The Swiss star seems to be a real conundrum for not only Wenger – but our entire fanbase. Some have already showed him the exit, others struggle to find his strength, then there are others who lay the blame for his failings at Wenger and his midfield partner. 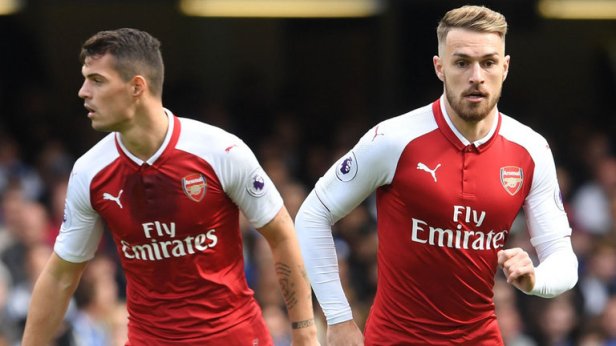 Xhaka perhaps is being utilised wrongly. The midfielder is being moulded or stuck in a defensive midfield position – but Xhaka is not a DM. Not yet at least. He is described by those in the know as a deep-lying playmaker, much like how Jack Wilshere’s role when he played for England last and was awarded a string of MOTM performances.

His passing as mentioned previously is one of the best in the league, but his defensive leanings – and those of his Welsh partner Ramsey – are seriously lacking. And this is why our midfield is absent at times.

The Premier League stats do not lie, and Aaron Ramsey and Granit Xhaka have put in 34 successful tackles – combined – so far this season after eleven games. That is little more than three tackles per game total from both players.

No matter of high pressing can mask the fact that if we don’t win the ball back, if we don’t disrupt our opponents possession, it doesn’t matter how well we distribute the ball if we don’t have it.

To put this alarming stat into perspective – Roberto Firmino has made the same amount of tackles that Granit Xhaka has made. Mario Lemina has made more than both Xhaka and Ramsey.

A central midfielder is probably the most demanding of roles on the pitch. You need to be a master of both defence and attack, dictate play, keep a constant eye on your opponent and ensure you are in the right place at all times. Our midfield right now is not performing one side of their role – if they were in a real-world job, they would be in a meeting with their manager having a discussion about their failure to meet KPI’s.

The frustrating thing is that they are both capable of running the show – as displayed by our comprehensive victory over that lot down the road. They were everywhere and gave everything.

Santi Cazorla is sorely missed not just for his infectious smile and insane two-footed skills. Despite his diminutive size, he gives his all in defence and can win the ball back. He tracks runners. We need an all-action midfielder.

If we are to continue with Granit Xhaka and Ramsey in midfield, then they both need to communicate and pivot. If one attacks, then the other sits back. It is such a basic requirement but it does appear that both players bunked this lesson. We all know that Ramsey has a penchant for attacking – he is rather good at those late runs that either distract defences or result in a goal. If the Welshman goes forward though, it is vital that Xhaka stays back and stands sentry.

The window is now open and we’ve tried valiantly to make this partnership work.

If this basic part of midfield is not achieved, our gaping aperture in the centre of the park will continue to hinder any progress that we should be making. Our engine needs a service or a replacement.

One thought on “Arsenal Engine Room Needs a Service”