This book forms part of a trilogy of unique books revolving around Arsenal football club, and the final part of this trio of tomes really lifts the lid on some incredible Gunners stories.

The story is so jam-packed with incident and drama, that it had to come in two parts, and both are as enthralling as each other. 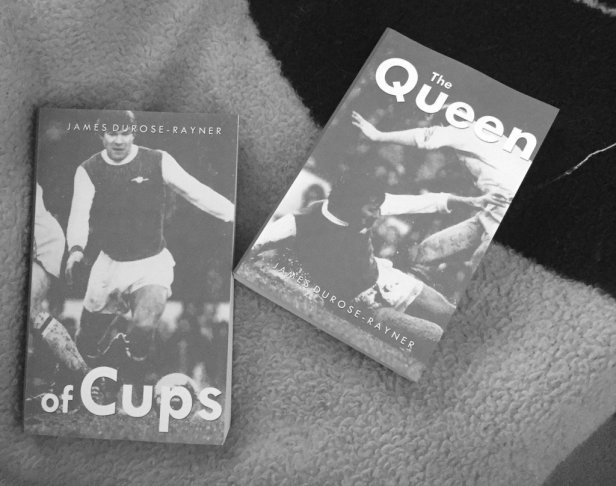 Author James Durose-Rayner began with ‘I Am Sam’ and the second book was titled ‘ITV7’ and both books feature different generations of The Arsenal. Intertwined with the unearthing of some incredible Gunners stories is a compelling fictitious storyline that chunters along at breakneck speed. Queen of Cups is no different, and readers will be shocked at what has been dug up about the North London club – and also how the story whizzes from one escapade to another.

Main protagonist Lee Janes has gone from a wheeling-dealing mess of a man to successful entrepreneur in the space of these books, and this final part sees his empire that he created open up avenues that could change his and his family’s life – for better or worse. It teeters between tragedy and glory with each turn of the page, but the acumen of Janes and his wife ‘M’ keeps the good ship on course – most of the time.

The dynamic between the main characters and the extended family is a delight to read, and it feels all too real. The vernacular is familiar and it allows you to identify with each of the people on the pages you read. It means that whatever befalls these fictitious characters, you are wishing only the best for them. The author has managed to tie the reader in to the twists and turns of each day that unfolds, and it means pages fly past quicker than an Alan Hudson through ball.

The former footballer above is a huge part of this book, and the whole thing benefits from his presence. Hudson was a maverick of the game in the 70’s, and his short spell at Arsenal is the focus of the football part of the book. ‘Huddy’ as he is affectionately known, features in both the fictional storyline and the in-depth look at the Arsenal team of 1976-78.

The England midfielder’s talents were matched only by his outspoken nature, and were it not for his tendency to speak his mind and some awful injuries, Hudson could have been a great of the game. Durose-Rayner obviously picked Hudson’s brains about the goings on at Arsenal during Hudson’s stint there, and the book explodes into life with the musings of Hudson.

I have had the distinct pleasure of speaking to Alan Hudson many times, and Durose-Rayner has him nailed on in this book. Hudson is the oil which makes this book pur – much like his displays on the pitch in his pomp.

The Arsenal team in question were tantalisingly close to silverware on many fronts in 1978, but the failings of Manager Terry Neill are unveiled whilst the Lee Janes storyline continues to gather pace, and the facts that are on show in this book are jaw-droppers not only for Gooners – but for football fans in general.

No spoilers, but the errors of Neill are tantamount to sabotage at some points, and some of the players the Gunners could have obtained were it not for the club dithering on price would have made a team of superstars. I implore supporters of any team to read this book just for this!

Those who enjoy a good yarn won’t be disappointed either. The author has made sure Lee Janes and his wife ‘M’ and their busy life really propels you to read more. This book though, has two engines and it benefits from the extra kick.

The two turbo-boosted engines in question are the aforementioned Alan Hudson – and M, Janes’ wife.

Emily Janes ties up loose ends, is an angel with kids, ensures her husband is always priority and is talented in front of camera.

This story really is of women empowerment. Whilst Lee is the business guru who ensures the opportunities never dry up, you get the distinct impression that were it not for Emily, things would capsize rapidly. She is an absolute dynamo in every area, and you cannot help but root for her.

Whilst reading this, it was all too easy to fly through six or seven chapters. Whether it be the failed attempts of Arsenal to sign Trevor Francis, or the crumbling of a lifelong friendship between Janes and Sooty, you simply want to find out more.

This being the final part of the trilogy means that there will be no more of Janes, but more importantly, does this mean that the author will stop producing what is essentially an excellent idea?

Football stories are fantastic to read, but if it was a book of just this, then you would soon tire of page after page of stats and transfer faux-pas. The combining of the fictitious and the factual means this is a football book that is so different to the rest. I dearly hope people give this a whirl.

If you do, then start with the first part. Not because the rest of the trilogy won’t make sense. No, Durose-Rayner makes sure you could start in any order you please thanks to his savvy intro’s.

It is because you really don’t want to miss anything.

Arsenal are a fascinating club to look back into, but such is the depth of research that is on show, all clubs from this era are heavily featured, so there are no shortage of nuggets of info to feast on.

The storyline too, has so much packed into each book, that you would kick yourself if you didn’t read the other two books.

So, to surmise, this book is a continuation of an excellent trilogy. Football fans will love it, and those who enjoy feasting on tales.

It is the way the writer has given the reader both that means this is a must-have for your collection.