Set your mind back to the glorious win Vs Aston Villa. It’s far easier to do than to reminisce on a defeat. The haze of a convincing triumph adds a layer of protective varnish on memories, making them far easier to recall. This particular 3pts was a virtual highlights reel for our attacking players, with runs and slide-rule passes aplenty. Have I set the tone sufficiently?

Despite Hector Bellerin scoring his 1st professional goal and Theo finishing with aplomb, the main vision that floods back is Mesut Ozil’s lackadaisical backheel through ball that sent Giroud on his way for the first goal. 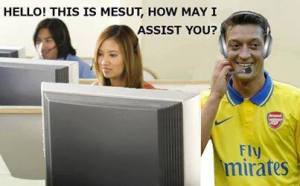 It was a beautiful sight that got better with slow-motion and repeated viewings. It encapsulated everything Mesut Ozil represents. I’ve got so carried away just thinking about it that I’ve missed my point entirely. I was at the game and such was the perfection of the pass from Ozil, that Giroud had nearly half a pitch to run before approaching the box. He did so whilst under the attention of two Villa men as well.

The time seemed to slow down as we watched with hands clasped and breath on hold. When the ball bobbled and it seemed as if Ollie had lost control, frustration appeared for a milisecond. You could sense the expectation from the crowd – they thought he would screw it up a la Gervinho.

Despite Giroud netting 8 times in just 14 games this term at that particular time, with the small facet of coming back from a substantial injury thrown in, he still has his doubters. People who admit his strength as a workhorse up front but cannot comprehend the idea that he is far more than a ‘hold the ball up’ merchant.  I’ve always been a fan, as you can tell from this piece I’d written last season. He seems to have made a leap this season, acknowledged by Arsene Wenger.  Let us now revisit that moment where he was clean through on goal against Aston Villa.

One theory amongst the leading minds of this respective physics field is that there are many universes and it grows at an exponential rate. Each universe is spawned by each and every single decision that is made and sits next to the opposite decision. A different reality for every choice you make. So, picture a reality where you are at your local shopping centre and you decide to take the escalator, instead of the lift. One version of you carries on existing as you use the escalator. The other version of you carries onward to the lift. Now each version will go on and on, making other decisions which alter their reality. It’s heady stuff to try and comprehend. Much like the film ‘Sliding Doors’ starring Gwyneth Paltrow and John Hannah – but without the soggy script. Now let’s take that memory of Giroud through on goal and envision that he misses.

He balloons it, he sends it into orbit. Or he puts it straight at Brad Guzan. Either way, he misses and doesn’t score the opener. Such was the time he had on the ball prior to the shot, the focus was all on if he would put it away. As previously mentioned, a tense blanket covered most fans when he was about to pull the trigger. If he did miss, I can confidently predict that a volley of derision would befall him. The old stigma that he can’t quite shed would stick once more but with extra hold. With such a big chance comes with it extra responsibility.

Theo can testify to this. Nevermind that he had a year off the pitch. Because he missed a couple of gilt-edged chances, the negative doubts came hurtling back. For some, he will never be a good enough finisher. The same goes for Giroud.

If he missed that chance, Ollie would once more be the effective lump we have up front that can win aerial duels and get us 15 goals but can’t be relied upon against top opposition. It doesn’t matter that he’s scored against City, Tottenham, Liverpool and Utd. It matters little that he’s scored from outside the box, inside the box, first time finishes, shots after a run, headers. All types of goal from a supposedly one-dimensional player. If he had missed, he would have been resigned to the nearly man he still is in some people’s eyes.

If you look at his finish in detail, you’ll notice that the moment you think he’s going to lose control is the very instant he’s checked Guzan’s position and decided to halt his pace a smidgin. this in turn gives enough space to put it over a now sprawling Goalkeeper instead of hitting it into the body of Guzan. It’s quite inspired.

Giroud had his faults when he joined in 2012 but he still ploughed on and bagged us a fair share of goals. this season he has pushed on and recognised the competition he has for his place. He adds more to the game over 90 minutes, he has cut down on the histrionics and his goal ratio and finishing have improved. It is hard to remove the doubt concerning his finishing as it runs deep from his first two seasons – but he is exhibiting that he has progressed.

We must refresh what we thought we knew about Giroud and give him credit for the player he has become. Take away the attackers from Real and Barca and I cannot think of another striker in his mould that could do a better job, though I’m open to suggestion. We have a chiselled Gaul who can change a game and adapt to playing styles. The jammy git has it all. Console yourself with the knowledge that in another reality, Giroud DID miss and he is ridiculously ugly.

Thanks for reading. #UTA